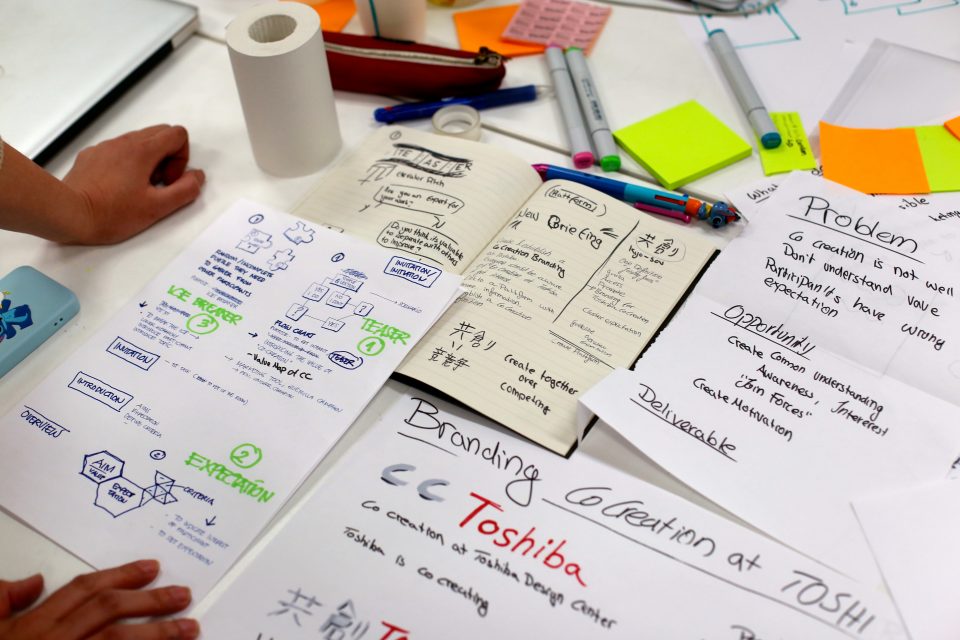 Toshiba is a worldwide acknowledged corporation and striving for innovation in technological development ever since. Since the discipline of Service Design arised and Co-Creation had been implemented successfully into organizational structures of major competitors, Toshiba startet to apply it as well. But as it is cost- and time-intensive, the topmanagement could not see its value for the company. Therefore, a group of students from Chiba University, Japan and Köln International School of Design was selected to work in a two-week project in Tokyo on the question of how to increase the value of Co-Creation at Toshiba. The brief was to develop in three groups three Co-Creation Workshop designs.

To explore how Co-Creation is perceived and conducted at the moment at Toshiba, we held individual and speed interviews with Toshiba designers, employees and manager and spread a written questionnaire about Co-Creation among two departments.
The insights that we gleaned revealed that Toshiba is facing different challenges regarding the implementation of Co-Creation. Silo-Structures between several Toshiba businesses, no common understanding about Co-Creation at Toshiba beyond the Design Center and a company mentality that focusses a lot on success prevents Co-Creation from being conducted successfully. Thus, we assumed that creating several workshop formats would not increase the value of Co-Creation significantly. We reframed the task and created a holistic system that focusses not only on the workshop itself, but also on an overall communication and evaluation of Co-Creation at Toshiba: Hibana – A system for sparking change.

A Guerilla Marketing Campaign about Co-Creation will help to communicate its value and create a shared understanding beyond Toshibas Design Center, that leads to active initiation and participation from all departments at Toshiba.
A common Co-Creation exchange platform will connect people, simplify communication and supply information and tools. Evaluation questionnaires help to acknowledge the values in the workshop, enable comparability and improve future co-creation processes.